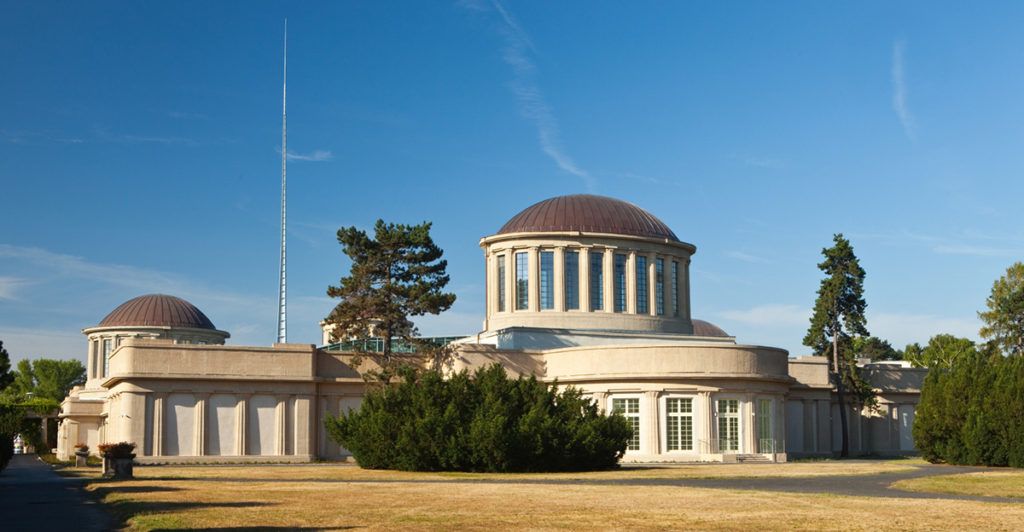 The Four Domes Pavilion, a modernist building erected in 1912 according to the design of the eminent architect Hans Poelzig.

The building is adjacent to the monumental Centennial Hall designed by Max Berg. Both buildings constitute a unique urban complex, which was created for the needs of the Historical Exhibition, organized in 1913 in Wrocław on the occasion of the centenary of the Prussian king Frederick William III of the proclamation An mein Volk and the victory of Prussia over Napoleon in the Battle of Leipzig.

Until 1945, the building was used for temporary art exhibitions and occasional presentations. In 1948, it was one of the exhibition sites of the famous Recovered Territories Exhibition, the symbol of which was the 106-meter spire, originally erected opposite the entrance to the Pavilion, designed by Stanisław Hempel.

From 1953, the Four Domes Pavilion was the seat of the Wrocław Feature Film Studio. This is where excellent Polish films were made, including The Manuscript Found in Saragossa by Wojciech Jerzy Has, Ashes and Diamonds by Andrzej Wajda, the cult comedies by Sylwester Chęciński Sami swoi, Nie ma mocnych, Kochaj or cast. However, along with the decline of the Wrocław production plant, which lasted for years, the Pavilion itself was also degraded.

In 2006, the Centennial Hall and the adjacent areas were entered on the UNESCO World Heritage List. In 2009, the adjacent building of the Four Domes Pavilion was handed over to the National Museum in Wrocław, in 2013–2015 it was restored, at the same time regaining its original exhibition function.

ASK FOR LOCATION
PDF
Location: Wrocław
Go to Top
We use cookies on our website to give you the most relevant experience by remembering your preferences and repeat visits. By clicking “Accept All”, you consent to the use of ALL the cookies
Accept All
Manage consent