Lower Silesia is one of the most beautiful regions of Poland, rich in landscape and nature. Here you can find the Table Mountains (Góry Stołowe) – the only mountains in Poland with characteristic plate structures – numerous charming river valleys, waterfalls and pond complexes, with the biggest one in Europe, the Milicz Ponds (Stawy Milickie). Lower Silesian Forests (Bory Dolnośląskie), in turn, enchant with the wilderness of nature, multitude of plant species and mystique, murky landscapes. Our region captivates not only with the beauty of nature, but also with splendid architecture. As a result of border changes in Europe after the World War II, Polish borders embraced one of the architectonically richest parts of pre-war Germany, which in its earlier history had been a part of Poland, Kingdom of Bohemia and the Habsburg Empire. This is just Lower Silesia, which is absolutely unique in the scale of our country. Nowhere else can we find architecture so different from Polish tradition, representing so many styles and epochs.

Lower Silesia is home to numerous gothic churches, baroque monasteries and post-Cistercian abbeys, tens of castles and palaces (ranging from Middle Ages till 20th century), objects of modernistic architecture (such as the Centennial Hall in Wrocław), or post-industrial architecture of the 19th and 20th century. We cannot miss the “remains” of the PRL (People’s Republic of Poland) times, either. Across the area of more than 20 thousand km sq, our region enchants with the multitude of unique places and locations ideal for film shooting, whichever considered: the architecture, landscape or nature. Lower Silesia is the perfect place for filmmakers scouting for landscape rarities! The multitude of landscape values in the region, the presence of film production specialists, the possibility of using the finances available from the Lower Silesia Film Fund, the support from Wrocław Film Commission and the friendly attitude of local authorities to any cultural undertakings promoting both Wrocław and the entire province, all of them are encouraging the development of interesting projects, among which surely there will be place for your ideas! So, welcome to Lower Silesia! 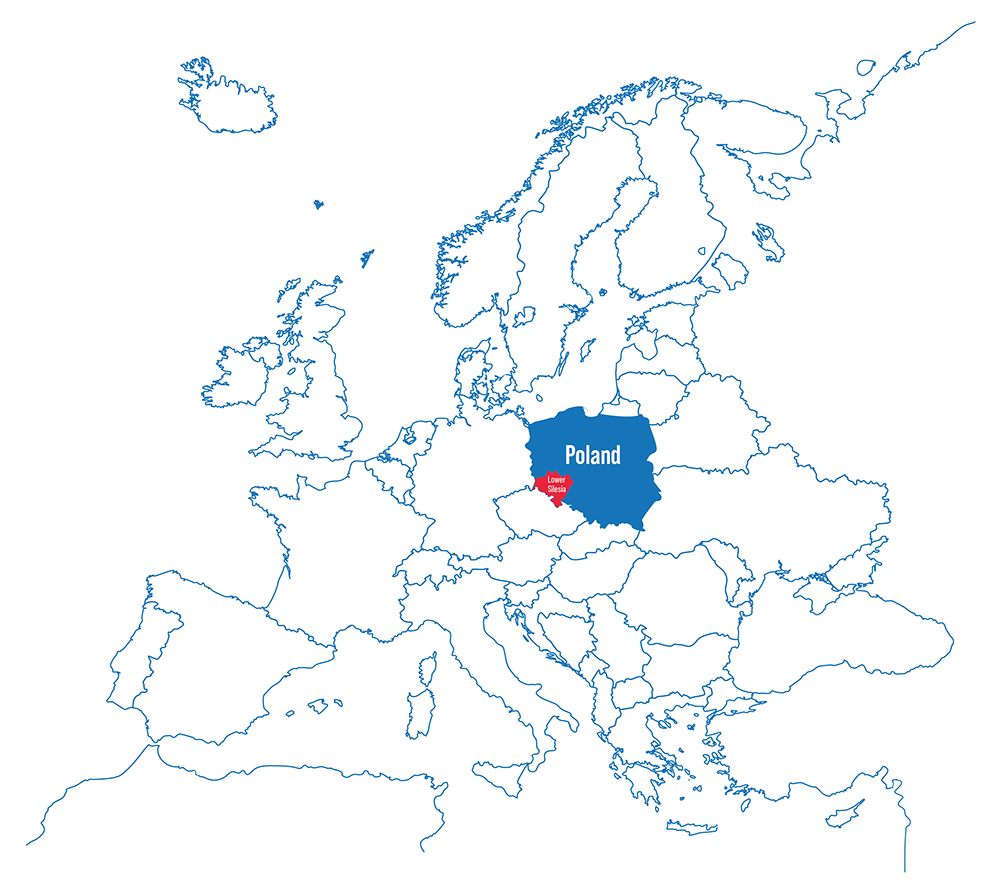 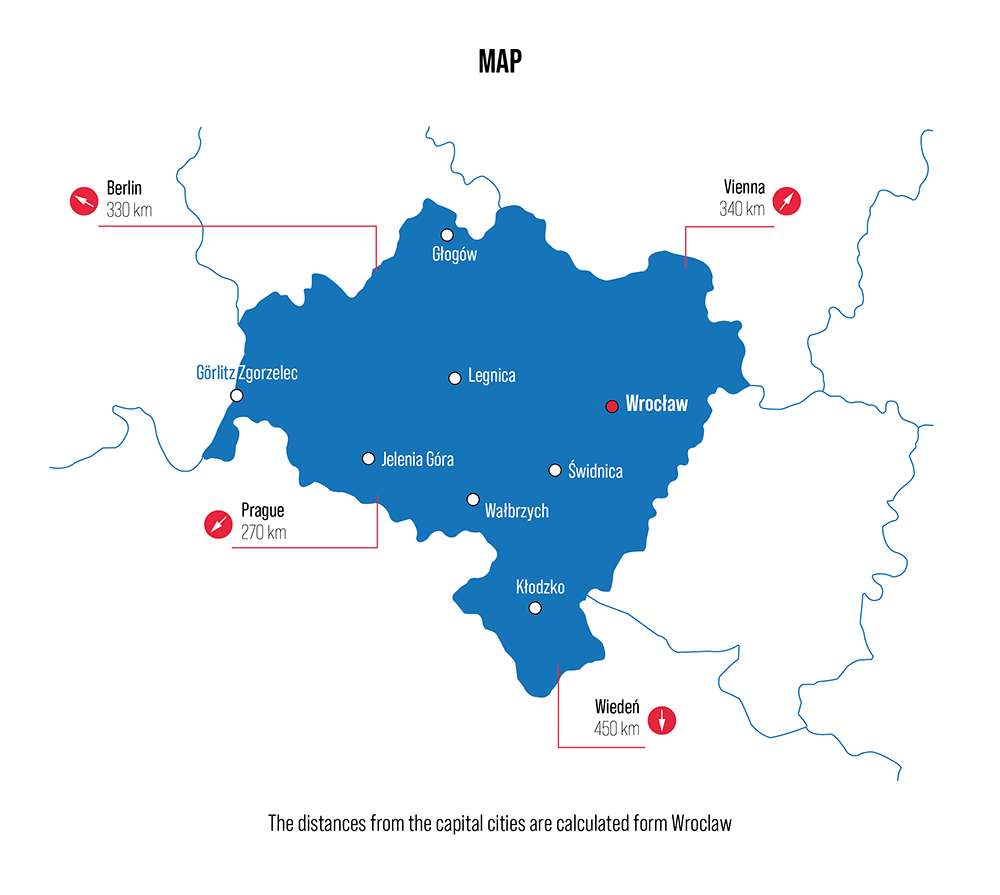 HOW TO GET TO LOWER SILESIA?

The Mikołaj Kopernik Airport in Wrocław is located in the south-western part of the city, within the distance of approx. 10 km form the city centre, nearby the Wrocław Motorway Ring Road, by which you can get to the airport quickly and comfortably, both from the side of Warsaw (through the motorway connector from Długołęka), from Poznań side, from trunk (national) road  No. 5, and also from the south form trunk road No. 8 and from motorway A4. From Wroclaw airport you can get to Frankfurt, Paris, London or Rome. A few international roads run across Lower Silesia, with the motorway A4 in the lead. The region capital city – Wrocław is connected with the rest of the country by a number of main roads:

The railway network in Lower Silesia is very dense. There are direct trains coming from all larger cities in Poland to Wrocław Railway Central Station at ul. Piłsudskiego 105, there are also trains form Berlin and Hamburg. Wrocław, Legnica, Bolesławiec and Zgorzelec also have railway connection with Görlitz.

The climate of Lower Silesia is the warmest in Poland. The winds blow from the West, and more rarely masses of warm air from the area of the Mediterranean and the Azores occur. The plants growing season in Lower Silesia lasts 225 days, which means it is the longest in Poland – as soon as in March we can see yellow forsythias blooming. Characteristic for the region are continual passes of low pressure bringing periods of a few days of rainy and cloudy weather. The rains are the most intensive in July, and the annual rainfall is 600 mm. The winters on the lowland are most often without snow, but in the mountains, in higher parts of the Sudety Mountains, the snow remains for 200 days a year and sometimes stays till April. 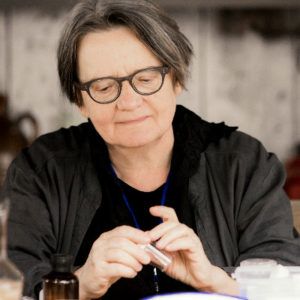 When I started preparing for the screening of Olga Tokarczuk’s novel “Drive your plow through the bones of the dead”, which takes place in the picturesque Kłodzko Valley, I knew that this place would have a profound impact on the character of the film. In fact, the beautiful, varied landscapes of this part of Lower Silesia became an independent protagonist of the film.

From the very beginning I was captivated by the majestic nature of this region. I believe that Lower Silesia is a great place for filming: on the one hand, it offers beautiful, unspoiled landscapes, on the other – picturesque towns with fascinating architecture and history. In Lower Silesia, I also received a very warm welcome from its inhabitants, whom I will always remember as cordial, hospitable hosts of this beautiful region. 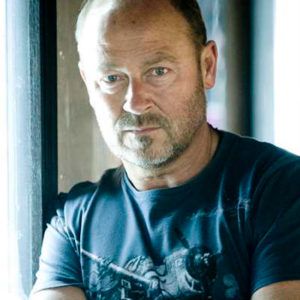 The movie is like a conversation. You can hear various tones and moods in it. If you go with your film for a screen “whisper”, for “tenderness” and for a secret, you will definitely come to Lower Silesia, you will fall in love, and then you will not be able to leave … 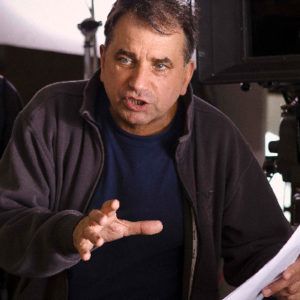 Ever since I started making films in Wrocław and Lower Silesia, it was clear to me that these are very cinematic places. Thanks to the architectural diversity, Wrocław can “pretend” pre-war Berlin, old Paris or Dutch cities. Also, Lower Silesian landscapes and larger and smaller towns are so colorful and magical that they look very good in the film. I know this from experience, because many times I have been the beneficiary of the wealth that Lower Silesia offers.

„… Wrocław can” pretend „pre-war Berlin, old Paris or Dutch cities. The landscapes of Lower Silesia and larger and smaller towns are so colorful and magical that they look very good in the film. I know this from experience … ”

Since 1950s Wrocław has been one of the three most important centres of film production in Poland. In the Wrocław Feature Film Studio, which operated from 1954 to 2011, more than 500 films were made, including films by Andrzej Wajda (Ashes and diamonds), Wojciech J. Has (The Saragossa Manuscript), Roman Polański (Knife in the Water), Andrzej Żuławski (The Devil, On the Silver Globe) and Agnieszka Holland (A Lonely Woman), placing Poland on the map of the world cinema. Most of the Polish directors who created the Polish cinema in the 20th century worked in the Wrocław Feature Film Studio and few of them – Stanisław Lenartowicz, Sylwester Chęciński, Waldemar Krzystek, Wojciech J. Has, Jan Jakub Kolski, Roman Załuski – remained connected with Wroclaw all their lives or for many years. As of 2011 in the studio’s premises operates the Audiovisual Technology Center where Polish and foreign films are once again made, e.g. Loving Vincent by Dorota Kobiela and Hugh Welchman or Speedway by Dorota Kędzierzawska.

Since the 1990s Wrocław and Lower Silesia – thanks to its unique locations and existing technical base – became a place for the completion of numerous foreign films including made entirely in the Wrocław Feature Film Studio Nightwatching by Peter Greenaway, Oscar-winning Karakter by Mike van Diem, films by Max Färberböck Aimee and Jaguar and Anonyma. A Woman in Berlin, fairytales Chronicles of Narnia. The Lion, the Witch and the Wardrobe and Chronicles of Narnia. Prince Caspian by Andrew Adams.

The new impulse for the cinematic Wrocław was the creation of the regional film fund (Lower Silesia Film Fund) and the Wroclaw Film Commission. Since 2008, the regional fund financed more than 60 feature films, documentaries and animations made in Wroclaw and Lower Silesia, among these: Suicide Room by Jan Komasa and Hatred by Wojciech Smarzowski, Spoor by Agnieszka Holland (the winner of the Silver Bear prize during Berlinale 2017) and Polish-Czech co-productions awarded with Czech Lions In the Shadow by David Ondřicek and I, Olga Hepnarova by Tomáš Weinreb and Peter Kazda, as well as Summer Solstice by Michał Rogalski and documentary The Queen of Silence by Agnieszka Zwiefka. The establishment of Wroclaw Film Commission in 2013 led to further interest of filmmakers in making films in Lower Silesia. The most spectacular example was Bridge of Spies by Steven Spielberg, made in Wrocław in 2014.